The following is an overview to early building construction methods in Sydney. Note this is not a historical document, nor one that covers all possible defects and problems, but is an overview to the types of buildings and their age. For further professional advice on your particular property or problem please contact our office by email on d.hall@buildreport.com.au or telephone 02 9418 7750. 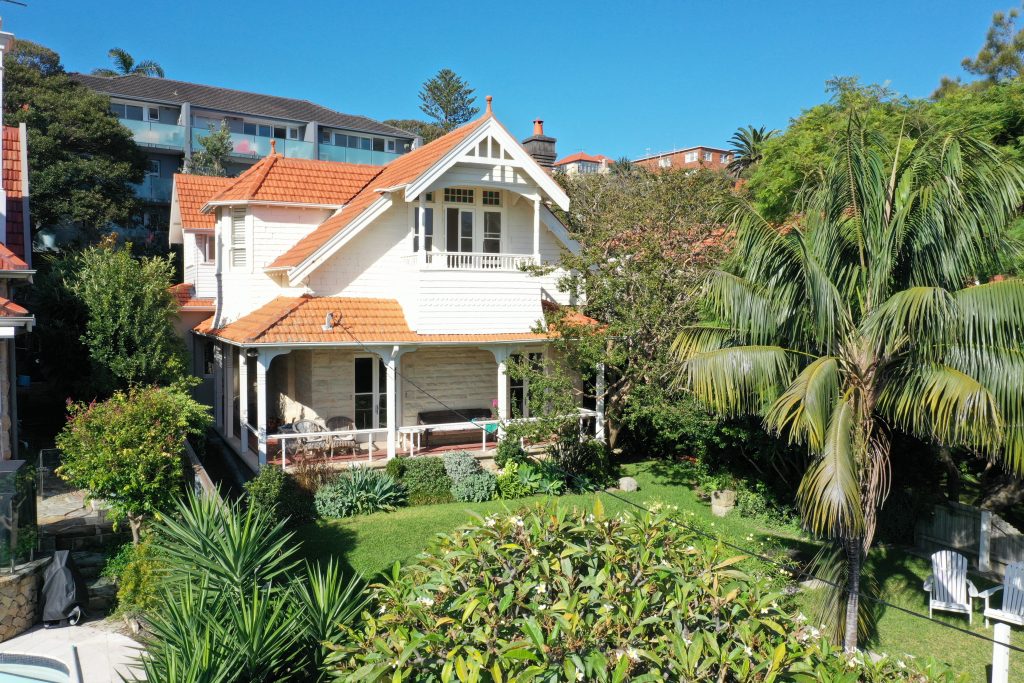 Federation houses are an Australian version of the English Edwardian house, but with Australian motifs. Many people think of “Federation” houses when buildings of this age are mentioned. The Federation house was mainly built from 1900 to 1914 but was evident or phased in before and out after this time. This ornate period was a sign of prosperity however soon diminished due to high cost of building materials, and not necessarily because of the first world war. 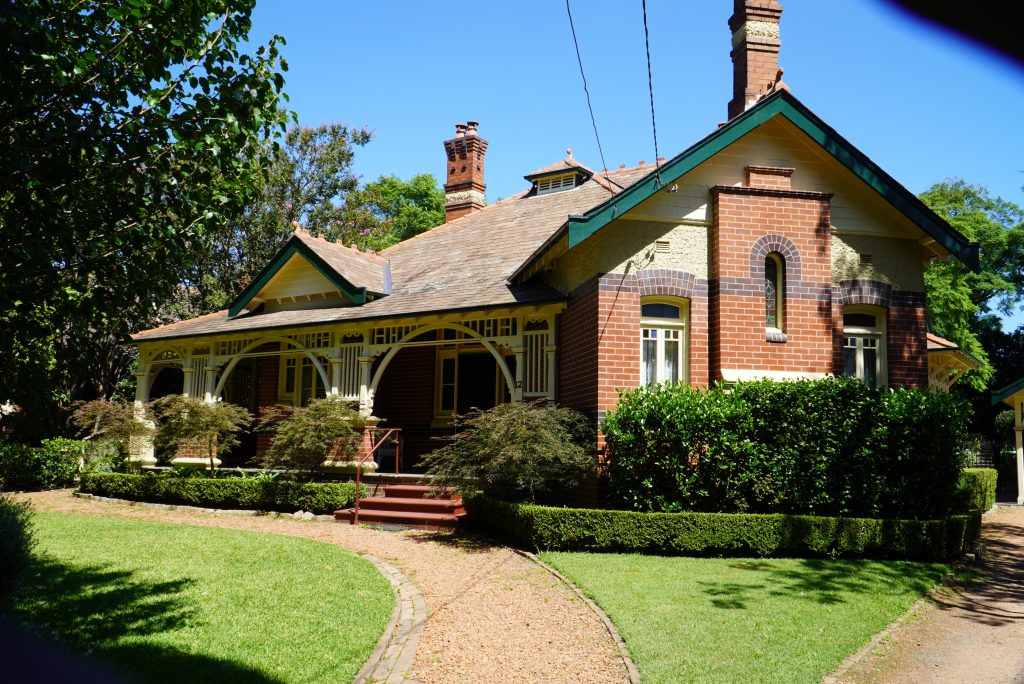 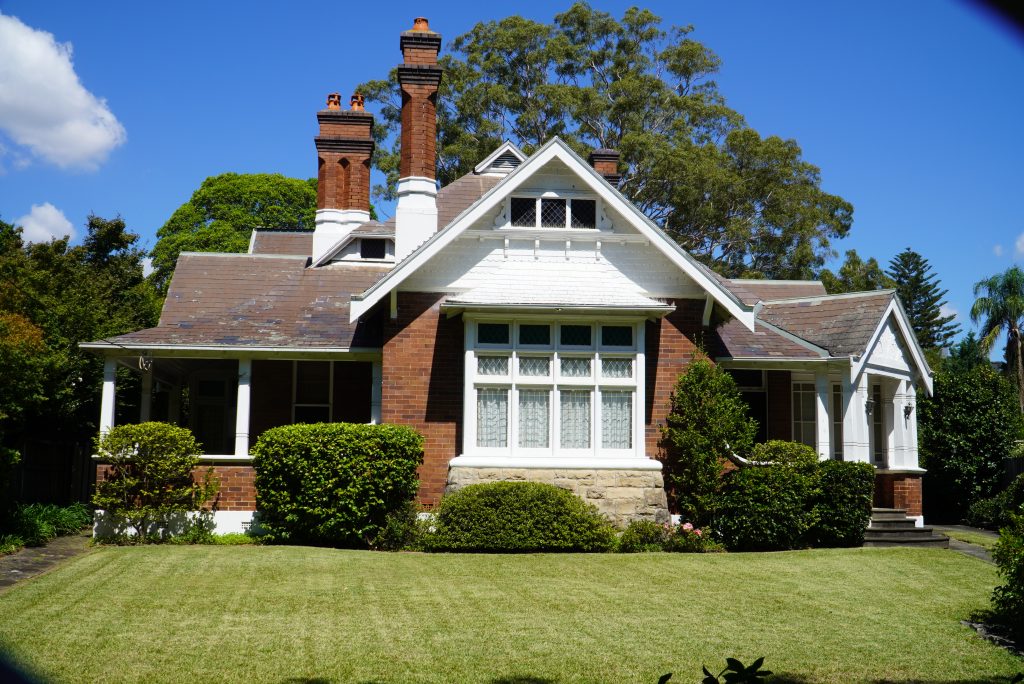 Federation houses became popular for many reasons including: 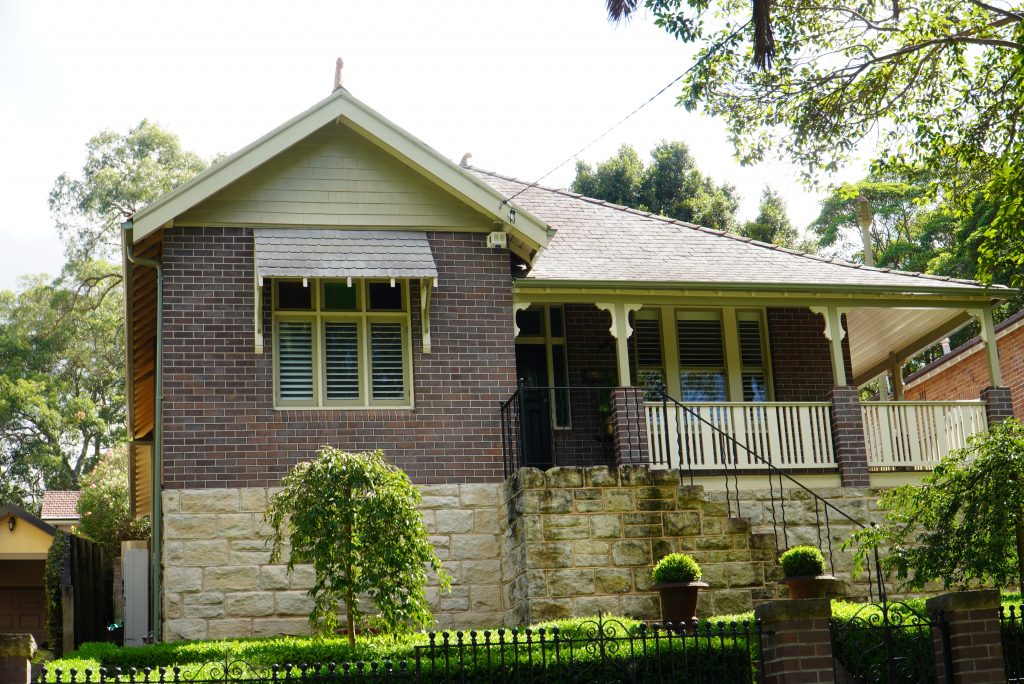 The carpenters would supervise the plumbers, internal wall plastering and ceiling linings.

Sometimes the kitchen and laundry had timber boarding. The carpenters would stay onsite and complete the internal fitout. The floorboards were initially cut in and laid upside down so that work could continue. The boards were cleaned, turned over and nailed into position as part of the final fitout.

Most materials were sourced from local suppliers which is why there is often minor differences between the profile (shape) of some joinery timbers to today’s suppliers.

The rear of the houses had some sort of glass conservatory to allow the keen gardener to grow his “cuttings” for the garden.

Electricity was generally not available until around 1930, so most houses prior to that date would have relied upon gas lighting. The remnants can still be found in some roofs with the abandoned gas pipes.

The front brickwork was usually red in colour with the side and rear bricks being a brown coloured “common” brick. 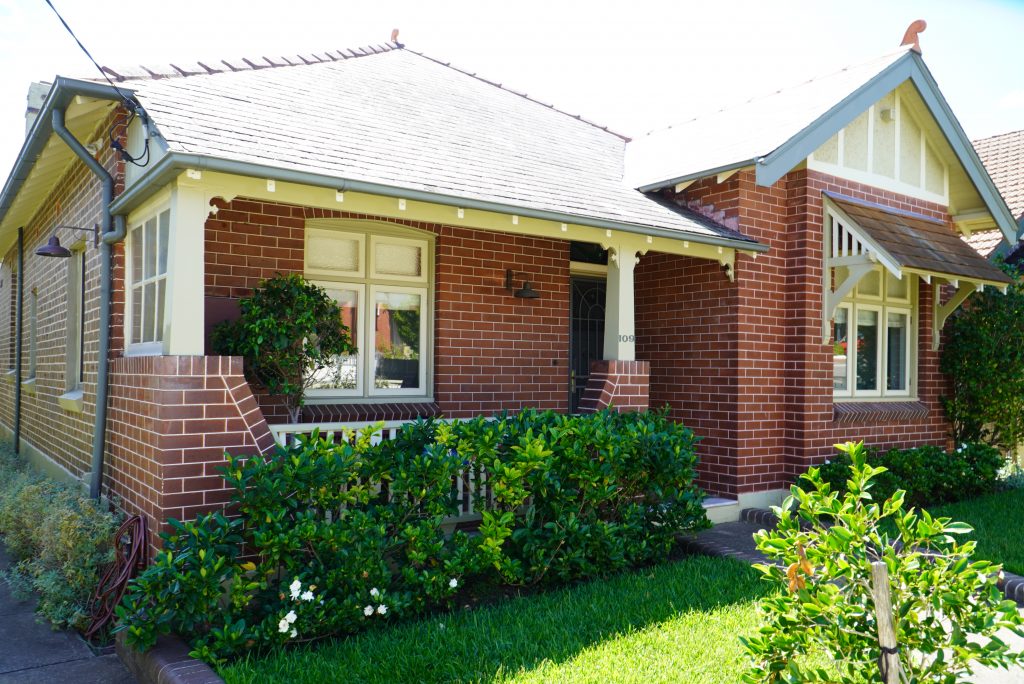 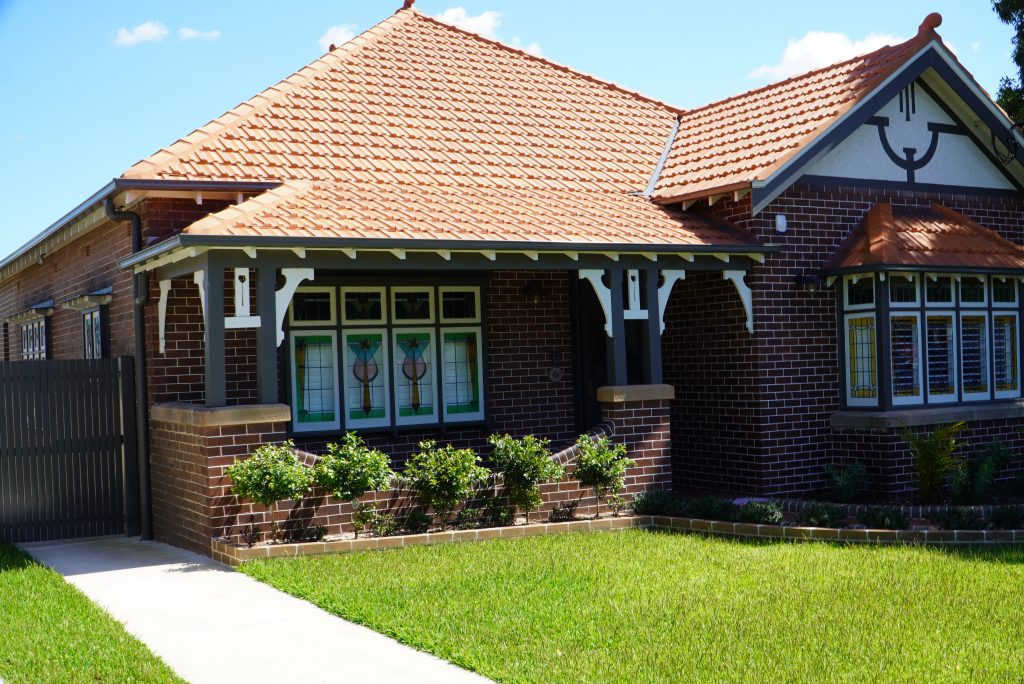 A Federation house can be easily identified by the shape of the roof. The roof always had a short ridge behind the gable, a short-broken hip leading to the short ridge line which ran across the house. two small triangular roof gable vents were installed at either end of the ridge. The roof to the rear was either a low pitch skillion or a lower pitch corrugated iron clad roof. The ceilings were always set down by 1 foot (300mm) at the end of the rear pitched roof.

The Wunderlich Bros started to introduce terracotta roof tiles from France and continued until 1914. Some of these tiles are still in place today but are extremely soft and brittle. If these tiles are replaced, then the roof will require restrutting as the roof is designed for the original tiles.

During this era there was a choice of Welsh slate or imported from France terra cotta unglazed tiles.

Many homeowners have altered buildings of this era, but one can always still detect the original era of construction. The main concern is the suitability of design and materials to the original house.

The suburb of Haberfield now has a conservation order on most buildings in the area to avoid unsympathetic alterations. Houses were altered during the 1970’s and now require another alteration.

When renovating buildings of this age, a check should be made on the condition of the mortar, rising damp and condition of roof tiles as well as electrical wiring and ceilings. In some suburbs the buildings can be affected by soil movement cracks. 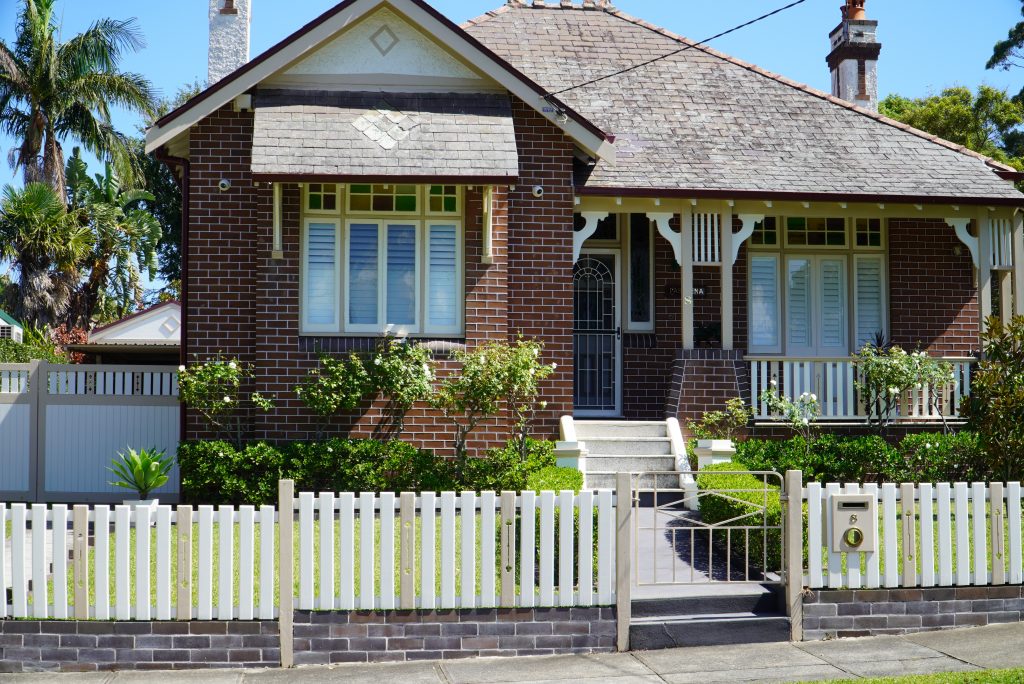 Another style of building construction that was common during that period 1900-1914 was the Arts and Crafts. This style is often overlooked and not understood. The style is a plainer look that never meant to have ornate decorations. It is more of an architectural design with architectural lines. Often all the ceilings were a plain flat finish. The external finish usually incorporated roughcast render to the upper level of the external walls, sometimes an unevenly pitched front roof gable and some metal decorations.

The Arts and Craft style was used extensively in Government and major buildings including schools, Fire Stations and sewer pumping stations. 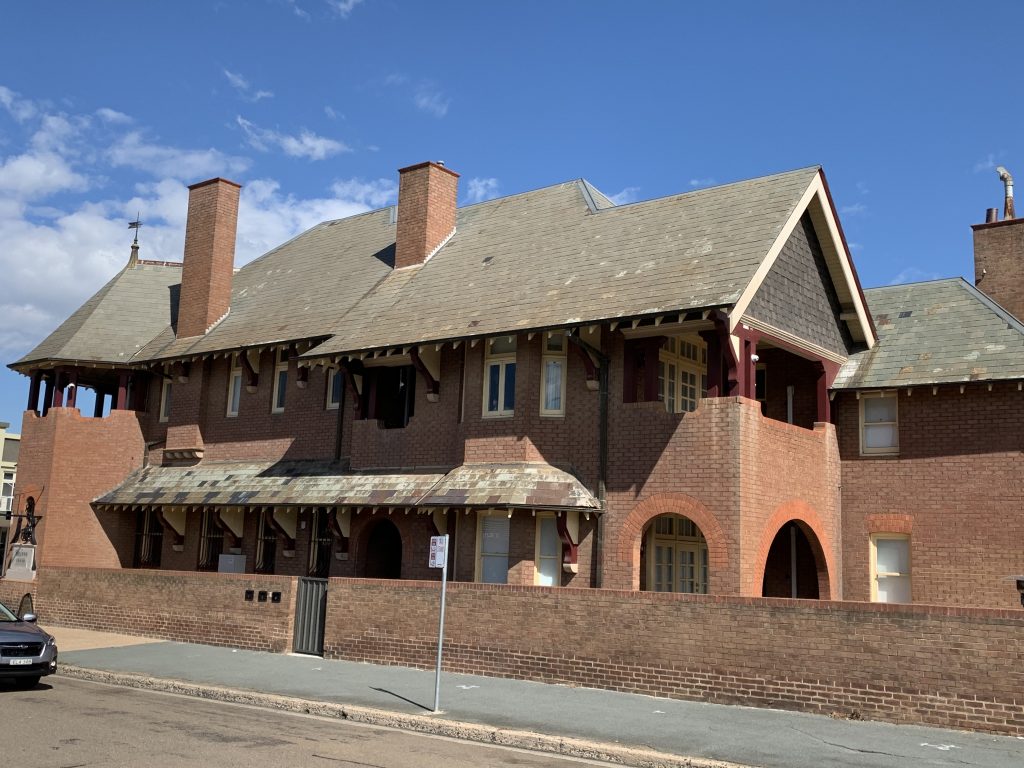 Even some public housing areas such as Sydney Rocks area has Arts and Craft style. 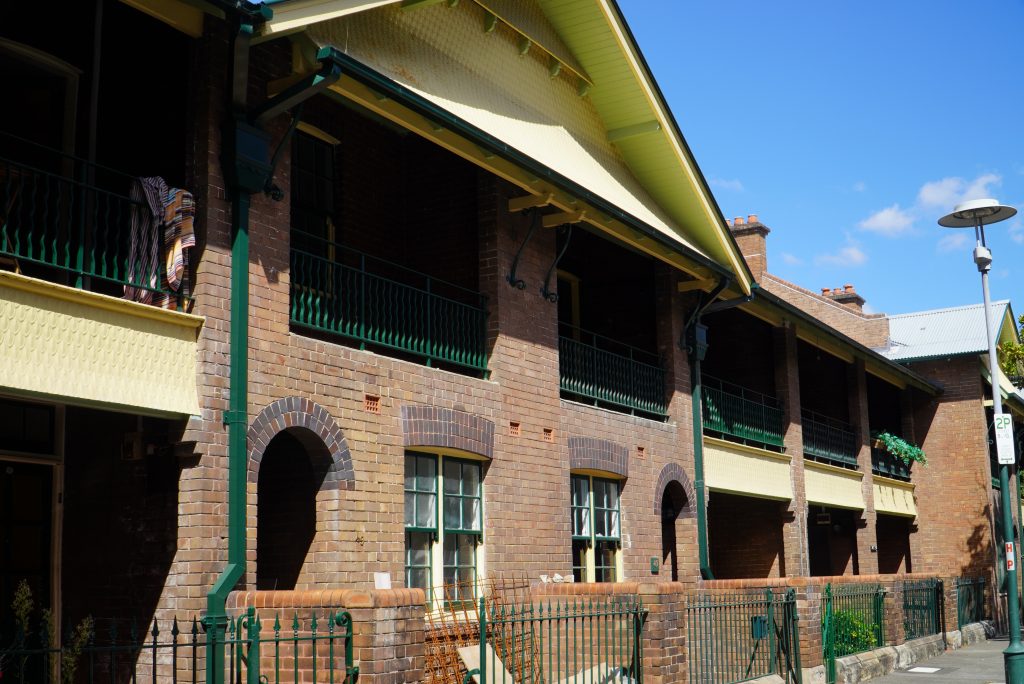 Stonework was sometimes used above or below the windows or doors but this was usually confined to the more expensive homes or where the architect was allowed to be true to the style.

Often the chimneys were splayed and roughcast rendered. 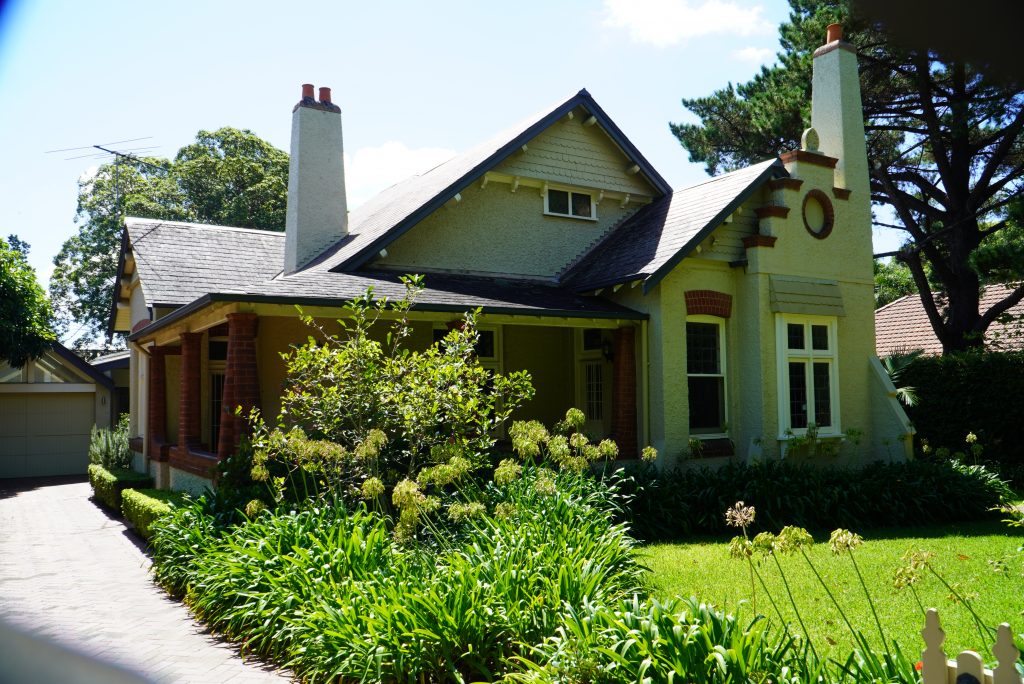 Many of these houses had plain and darkest coloured brickwork which allowed the style to be more predominant. Often this brickwork has been painted to lighten the overall colour and has changed the original intent. 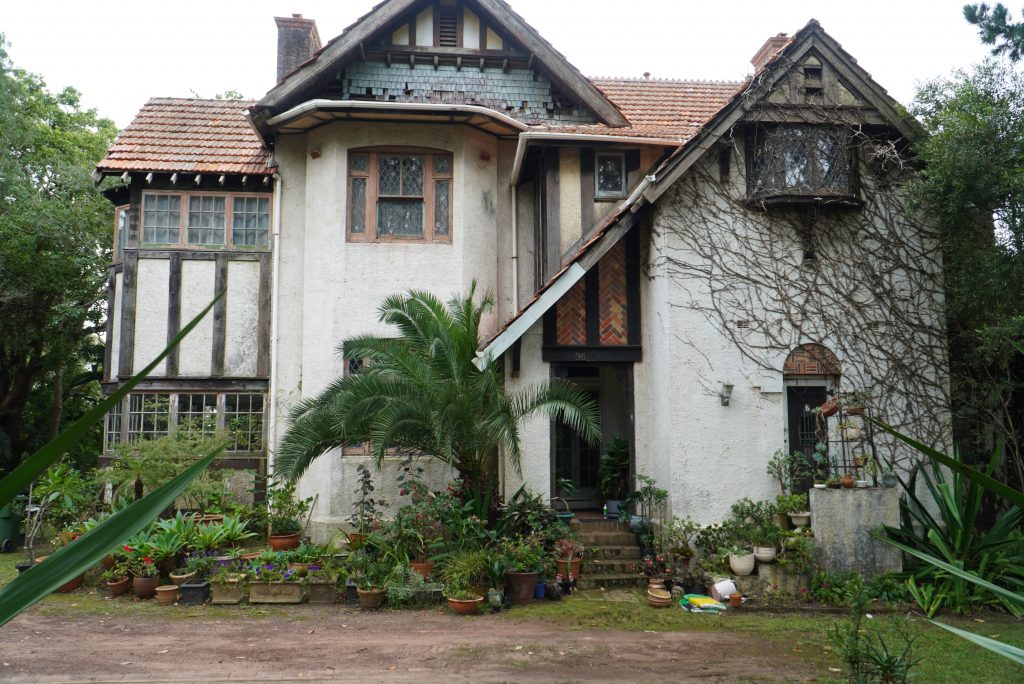 The above photograph has strong Arts and Crafts design criteria including type of roof.

As is often the case, there is a mixture of styles, cross over or transition of styles. 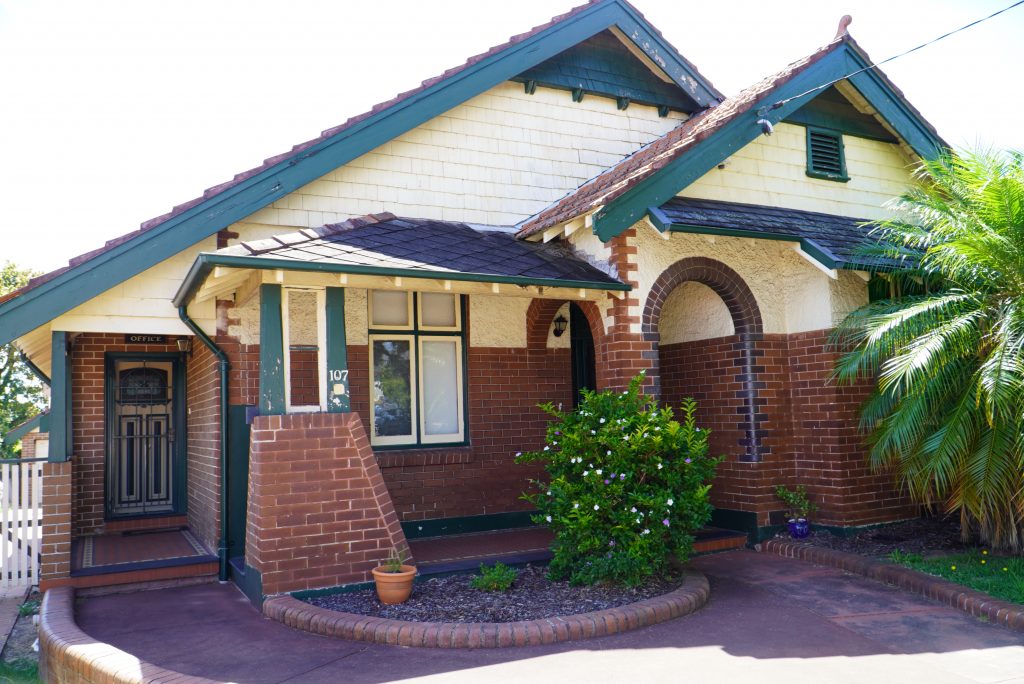 The postman would know that house as there were so many different names. Things changed in the mid 1930’s with the coming of telephones and a phone book. Houses were given numbers so that addresses could be published, and the house names now remains as an interest of a bygone era.

Building construction continued during the first world war, but at reduced pace.

After the war there was a shortage of tradesmen and materials. The cost of houses had to be reduced, so the ceilings were lower, and the ceilings panels became larger.

Gone was most of the detail, but still allowed a plainer style lead lighting was put into the front windows. The floor plan was generally simpler and the houses smaller. Most were single storey in height.

Roof tiles were manufactured in Sydney, mainly by Wunderlich Bros. These tiles were stronger than the previous tiles, but still slightly porous by today’s standard. The style of roof construction changed, but usually did not have collar ties as we would have today. The roof was adequate for the weight of the original tiles. Many houses of this era had a “sleep out”.

This was an outside patio or area where people could sleep on a hot summer night. It was also considered a healthy alternative to have some fresh air in an area when TB was around and there was no real cure.

The front brickwork was usually a very dark blue/black brick with brown coloured “commons” at the side and rear. Tuckpointing was completed to the front of the house but only up to around 1925. The mortar to the bricks was always soft lime, but some of the bungalows started introducing cement mortar up to floor level. These houses are very functional, generally well built for their original use and usually lent themselves to additions. 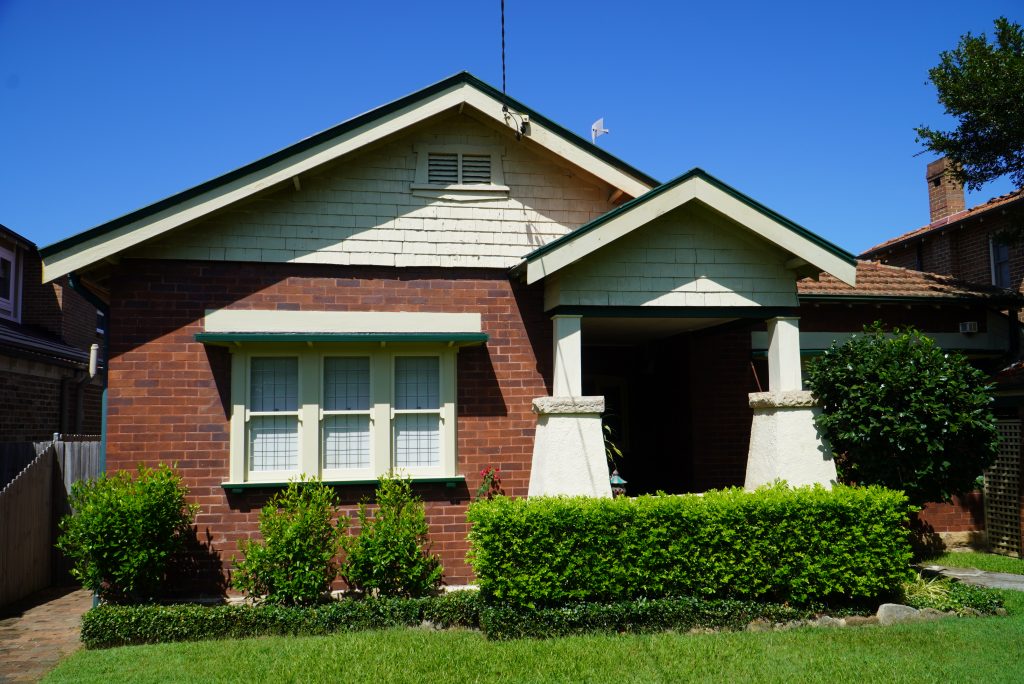 The above house retains the red brick from the Federation era but has a change in roof styles and front entry. 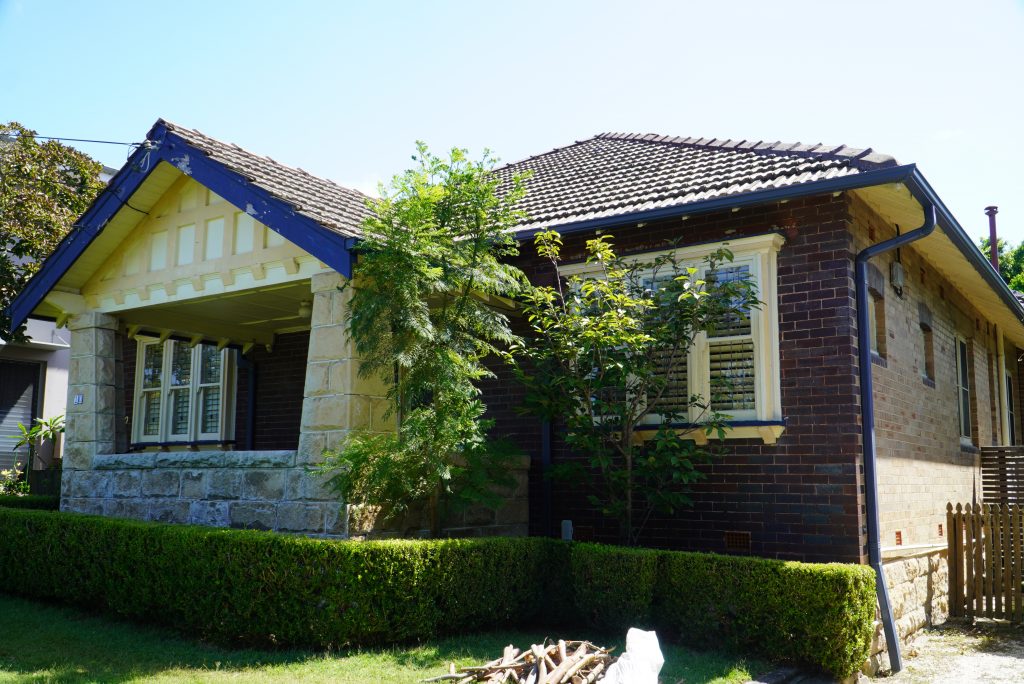 The above house is showing the dark blue/ black bricks which were originally tuckpointed. 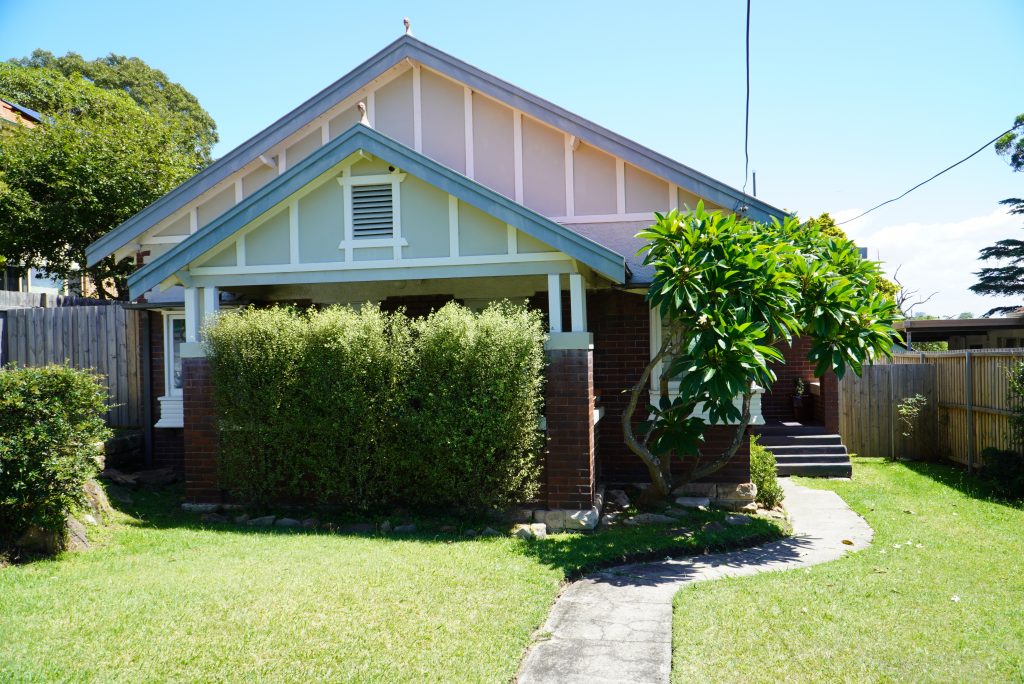 This is a classical bungalow style building with asbestos clad front roof gables. 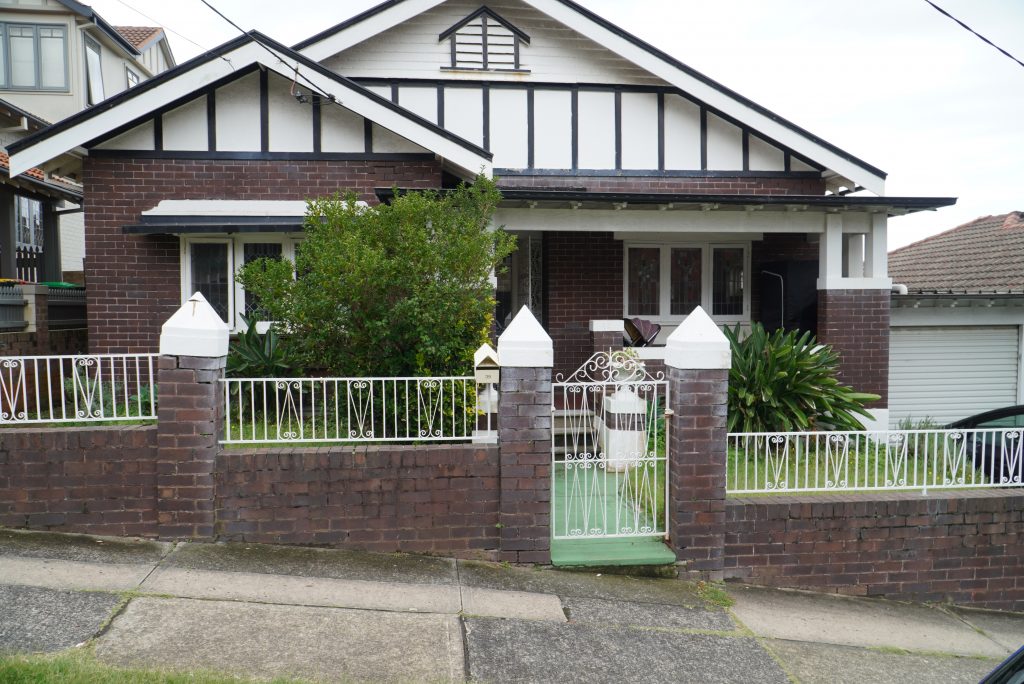 Another classic bungalow style where the front patio had a flat roof and over the front bedroom was a canopy above the window.

For professional identification of a building and advice on the construction and best way to repair, renovate or extend and existing older or heritage building then contact our office on 9418 7750 or email d.hall@buildreport.com.au.

Get A Quote
Learn More