The following is an overview to early building construction methods in Sydney, including heritage properties, and an insight to give a preliminary understanding of building methods and requirements of that period. Note this is not a historical document, nor one that covers all possible defects and problems, but is an overview to the types of buildings and their age.

It should be remembered that during this era there was no Building Code to set a requirement and these buildings in many ways do not comply with the current Building Code of Australia. But they have lasted more than 100 years, and most have still a serviceable life.

If you are considering repairs, renovations or updating your home it is important to know and understand the construction of a building prior to commencement, what is possible, so that your additions or repairs do not adversely impact the existing building. 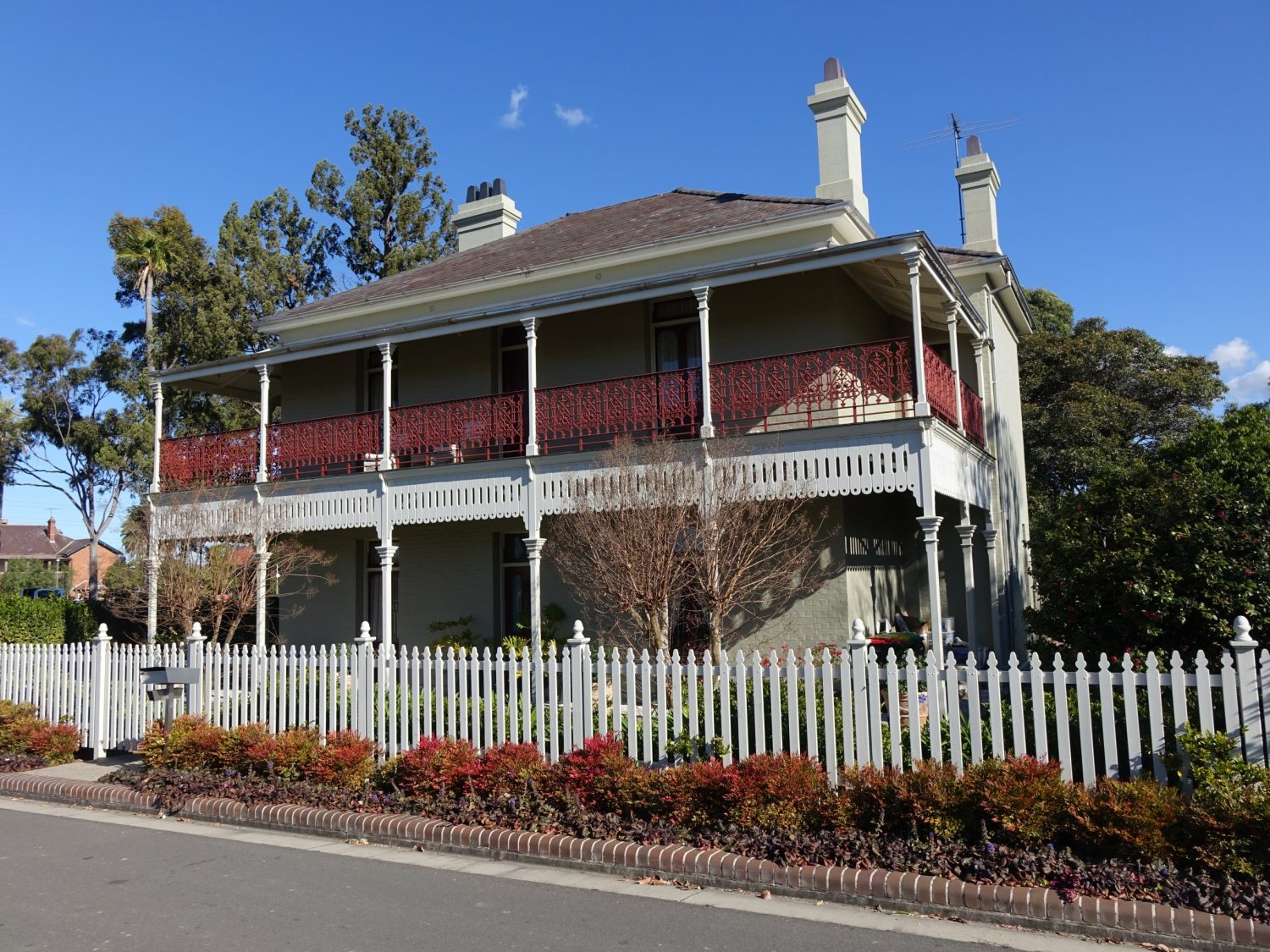 A few buildings constructed prior to 1840 still exist and are used for modern living. This earlier type of construction is very plain when viewed against the later Victorian era style. The buildings were very small by the standard of what we expect today.

With all earlier construction, even in the Victorian era, transport was very limited, and materials were “locally” sourced or manufactured. There were no skip bins for rubbish removal and all excavations were by hand. Hence the excavations and constructions would vary depending on the budget to construct and the availability of materials and skills of the tradespeople. 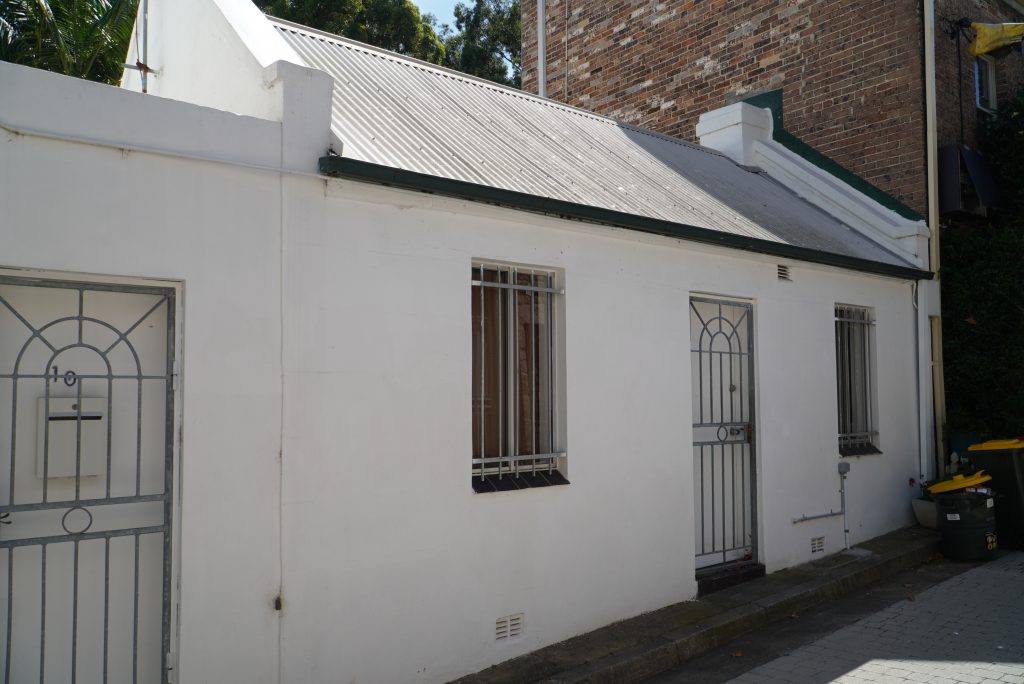 The construction was also very basic and followed typical English methods. Buildings of this age can be found in The Rocks area, Darlinghurst, workers cottages in Redfern and residences at Richmond as well as Windsor to mention a few. 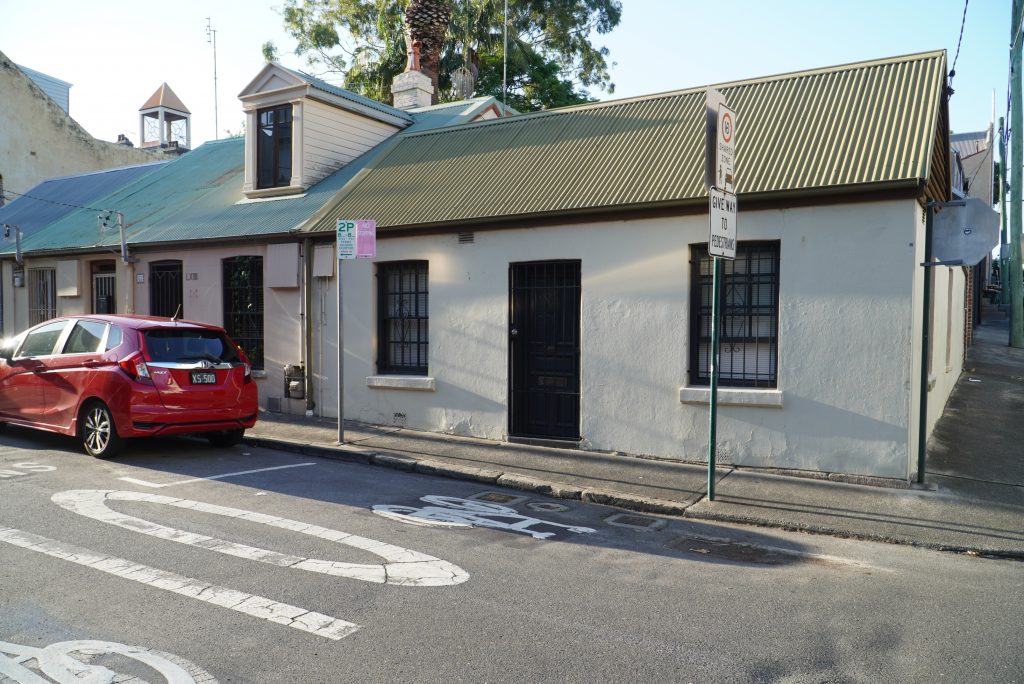 The wall construction consisted of either solid stone or locally made soft sandstock bricks which are sometimes referred to as convict brick. As the bricks were very soft, to achieve some structural integrity, the walls were a solid bonded construction, again typical English style. In some areas, including country locations, stone was cut and used as walls. 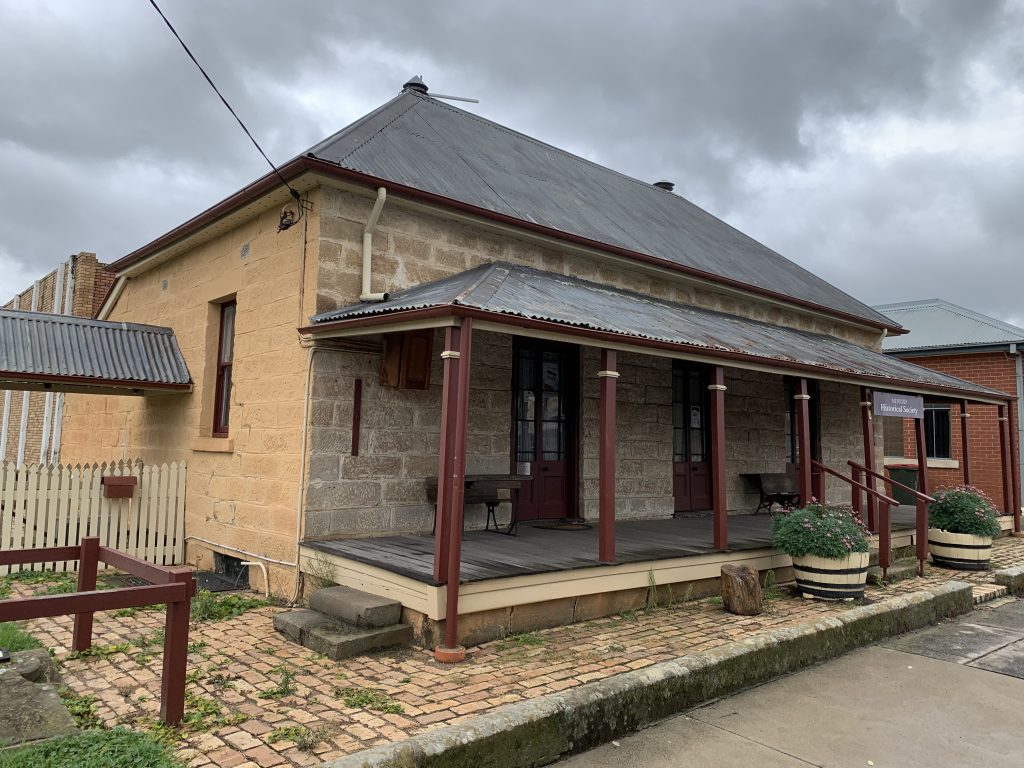 The issue with solid walls is lateral or penetrating dampness as there was no cavity to prevent this occurring. 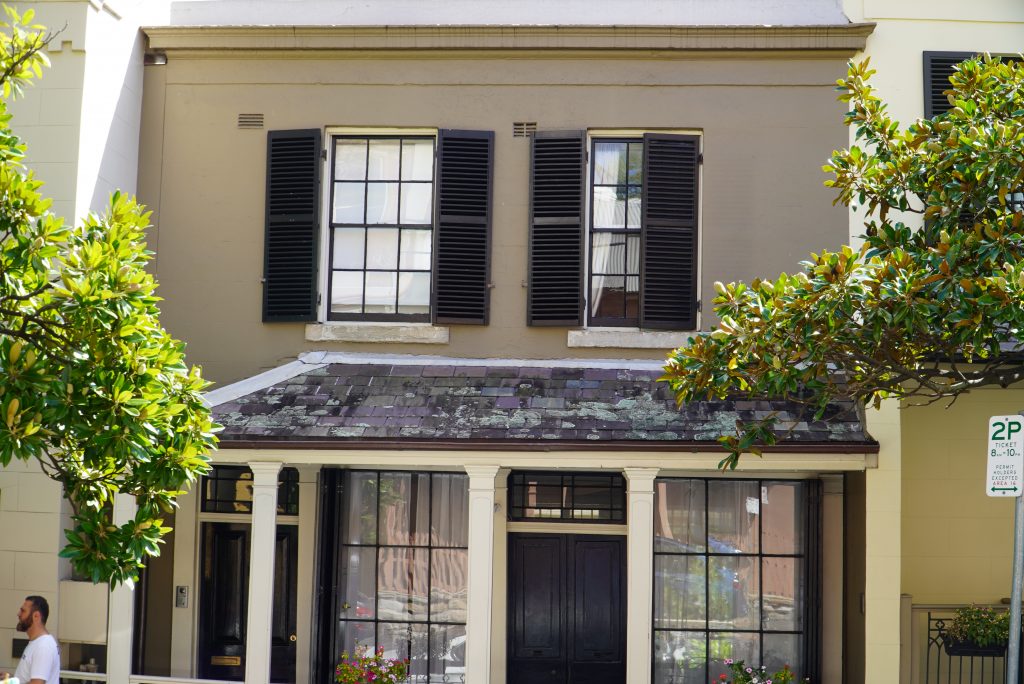 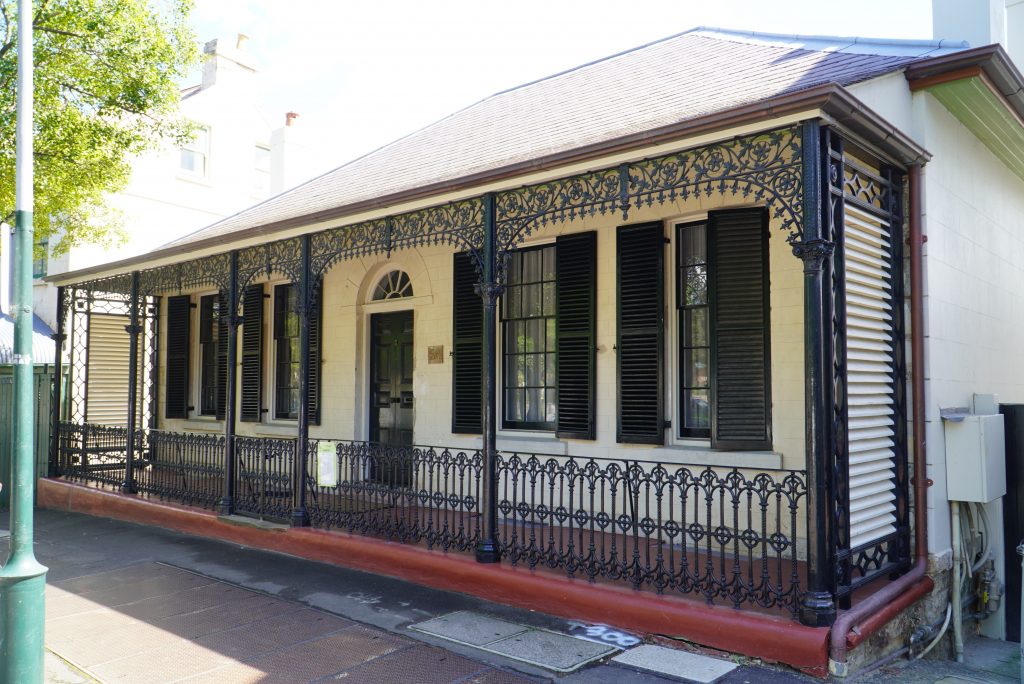 The buildings were constructed virtually on the ground and now suffer from varying degrees of damp and termite problems. As the external walls are solid brick to provide structural strength of soft original sandstock type brick, the external walls were usually rendered and painted to provide some protection from the rain and damp. In the workers cottages, the walls were not rendered to save costs, but painted.

The current trend to remove the paint and expose the feature bricks results in dampness penetrating the walls. 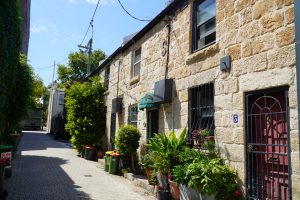 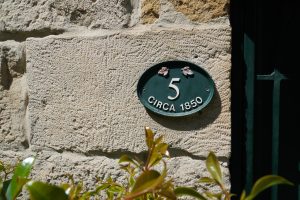 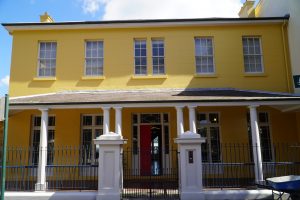 Queen Victoria came to the throne in England in 1837. No doubt the state of Victoria was named after her. The first Prime Minister in her early years was Lord Melbourne. Her influence was not readily evident in Australia as we were still the colonies and many of our early settlers, including builders and designers, had little choice in their career or place of work and little contact with improvements and changes that occurred in England. 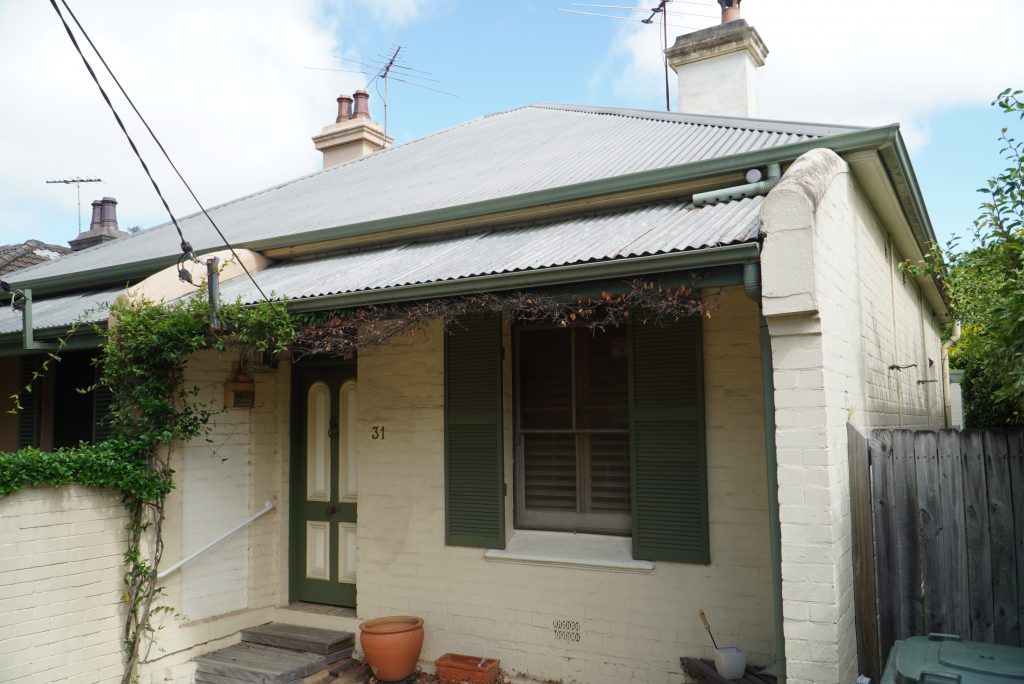 Many houses and terraces of this period, and up to 1910, did not have a bathroom included in the original construction. The weekly bath was had in a neighbour’s house or in a metal tub in front of the fireplace. There was no hot water apart from water boiled in a pot and on the stove. The reminder can be found in some houses today where a small bathroom has been located outside and under the house. 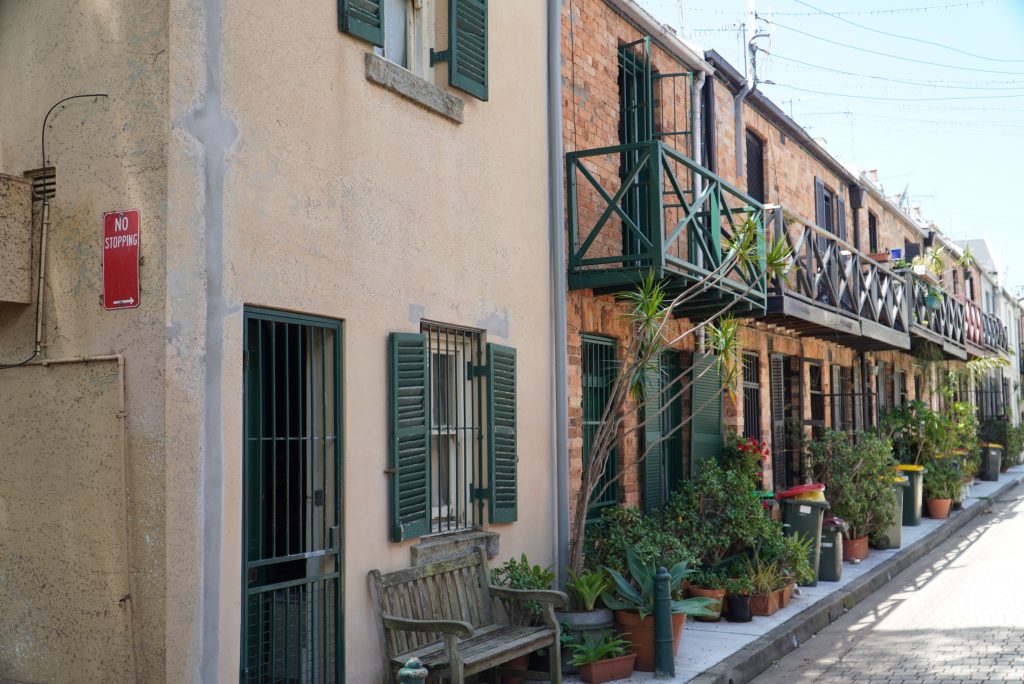 Life changed in the 1850’s in Australia for two reasons. Firstly, gold was discovered and brought wealth and free settlers particularly to Melbourne, Ballarat, and Bendigo in Victoria.

Sydney was less prosperous but was affected by an increase in population. The second impact was the industrial revolution which brought increased productivity, including to the construction of buildings. 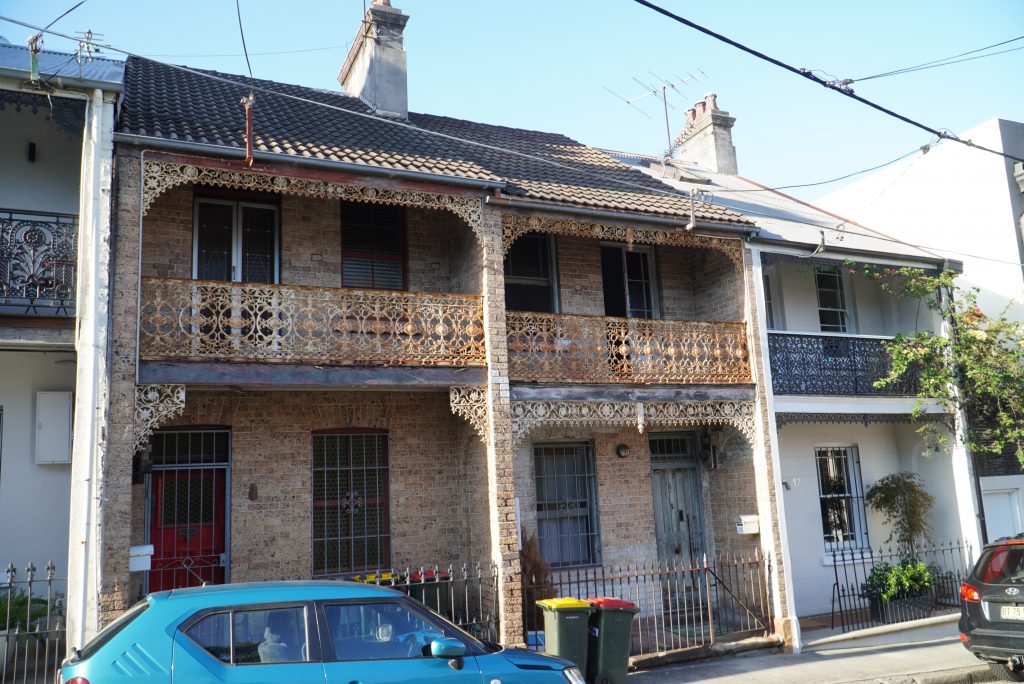 The Victorian era can be categorised into 3 sections. They are – early, mid and late. The late era started with a very prosperous time, called the Victorian boom era. This ended in 1893 when the shearers went on strike for long enough to cause a financial depression in the economy. The buildings after this period were much plainer in detail to keep costs down. 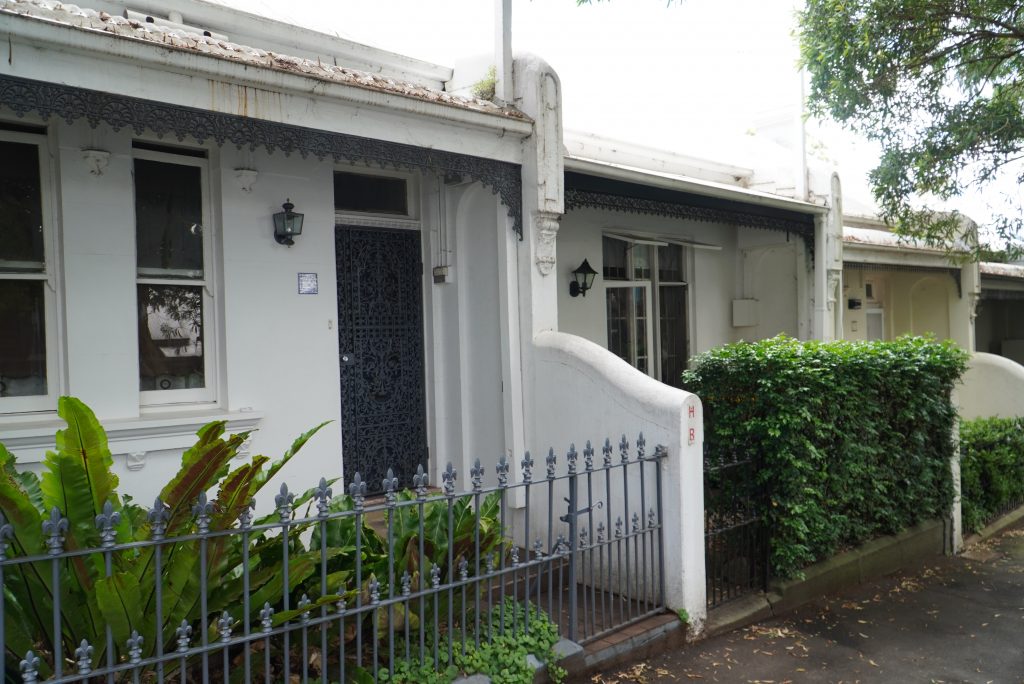 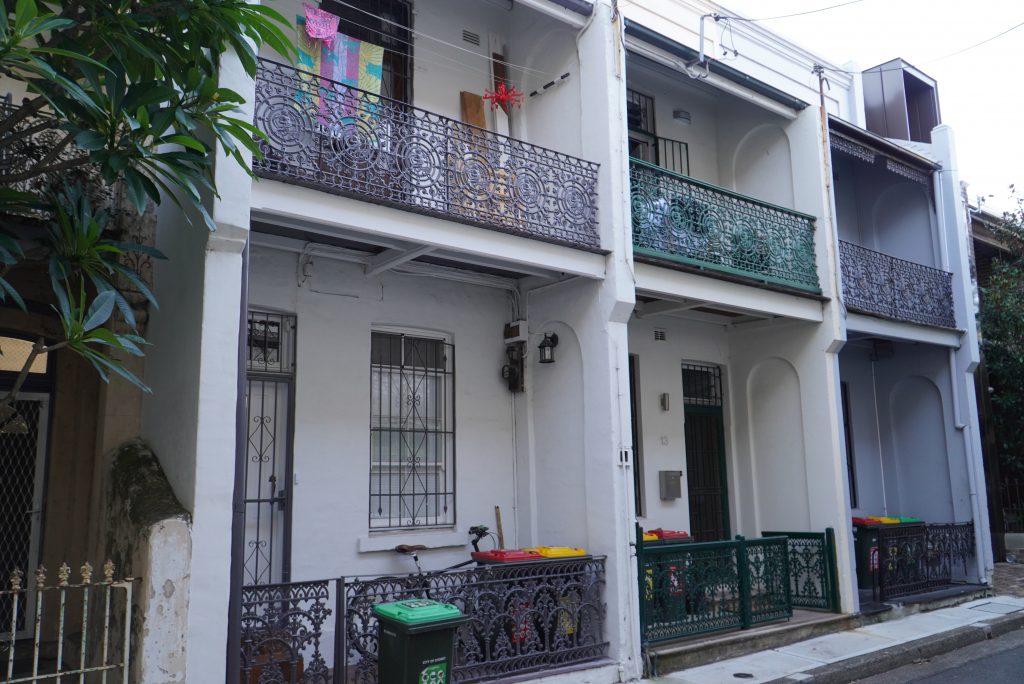 The later Victorian era is identified by the construction of fire separation walls above roof levels which became a requirement around 1893. 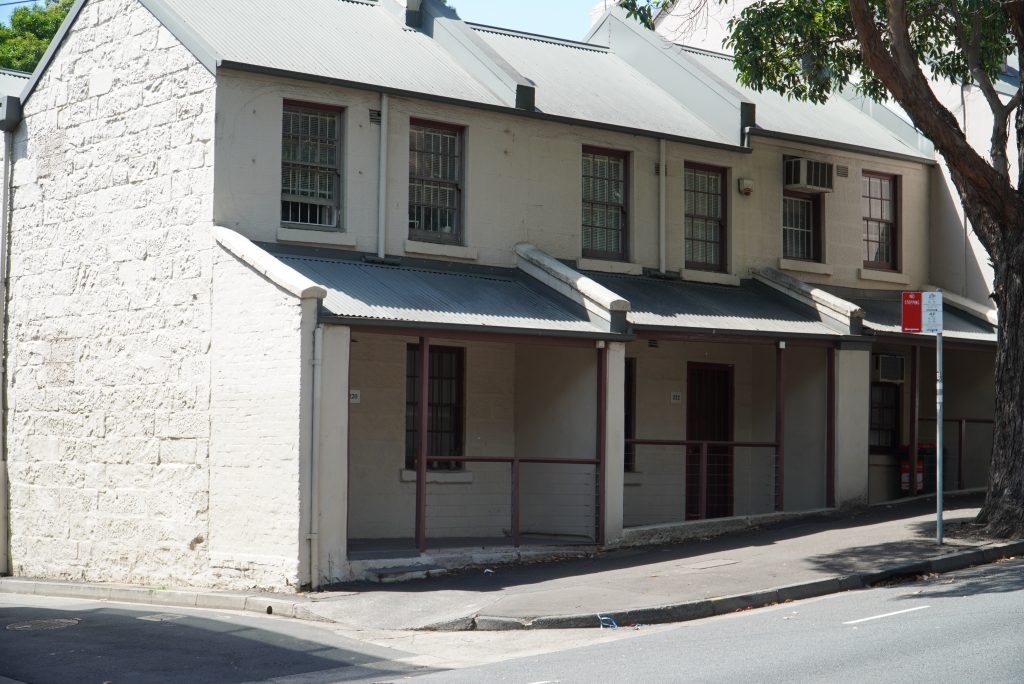 The late Victorian era is also identified by some larger and more grand residences to show off prosperity. 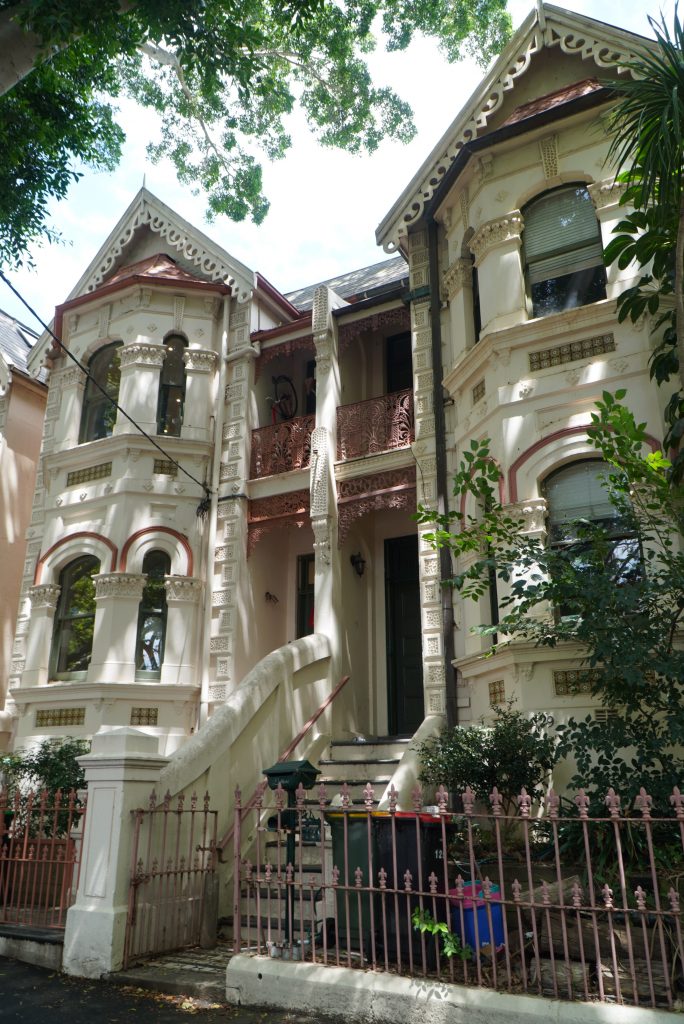 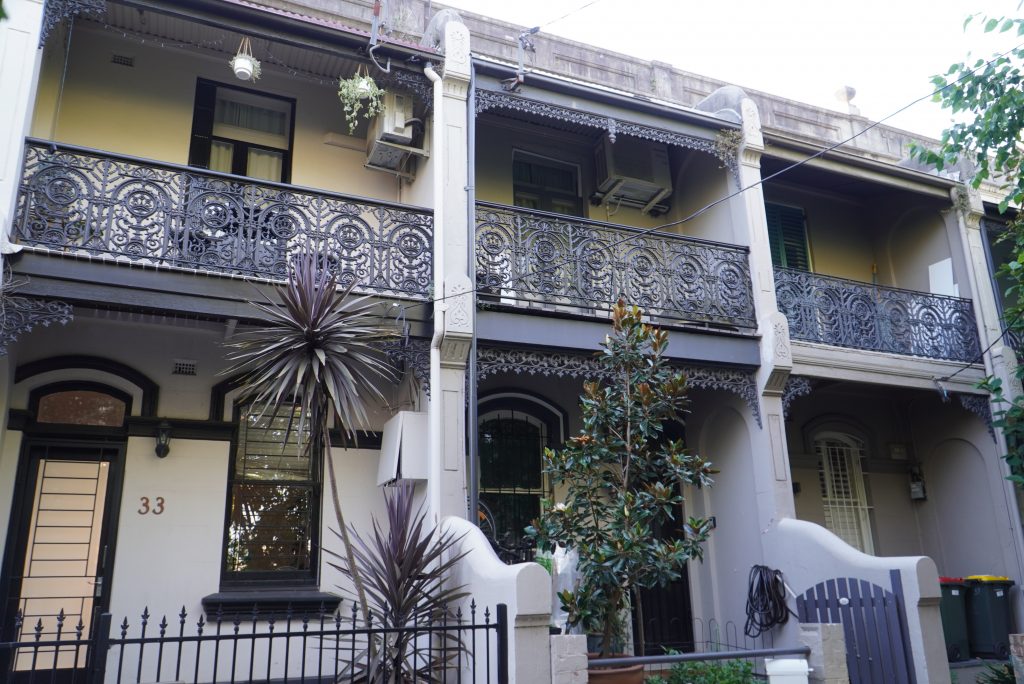 The construction of buildings above two storeys in height was only possible with the introduction of a different type of brick called “dry press” where the bricks were pressed into shape, carried into a kiln and fired for about 12 days. This resulted in a much harder and stronger brick which allowed larger construction. 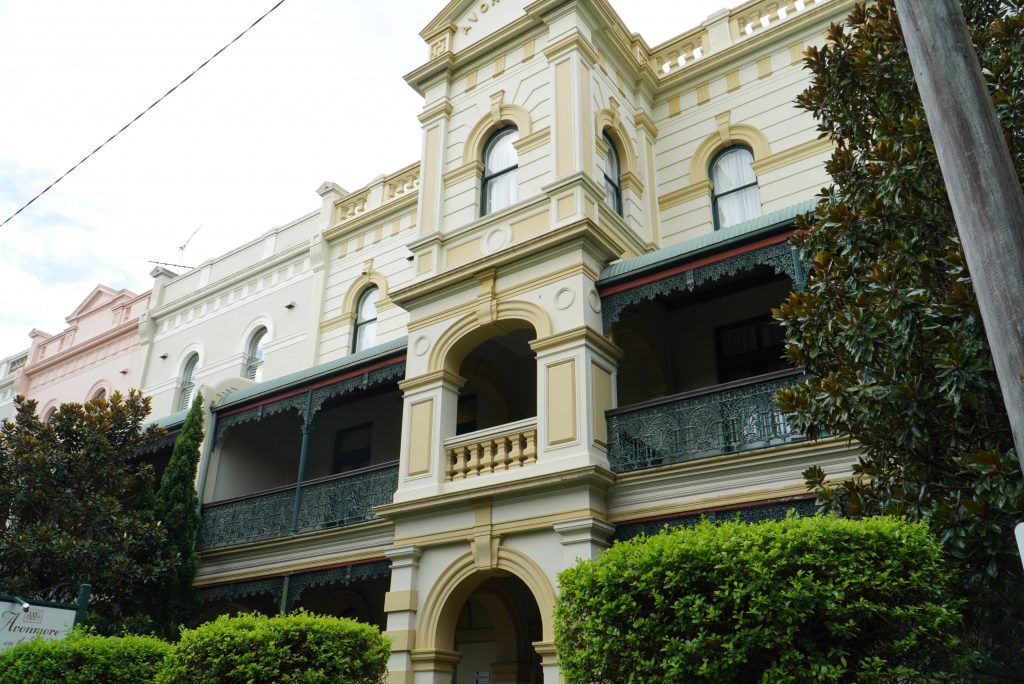 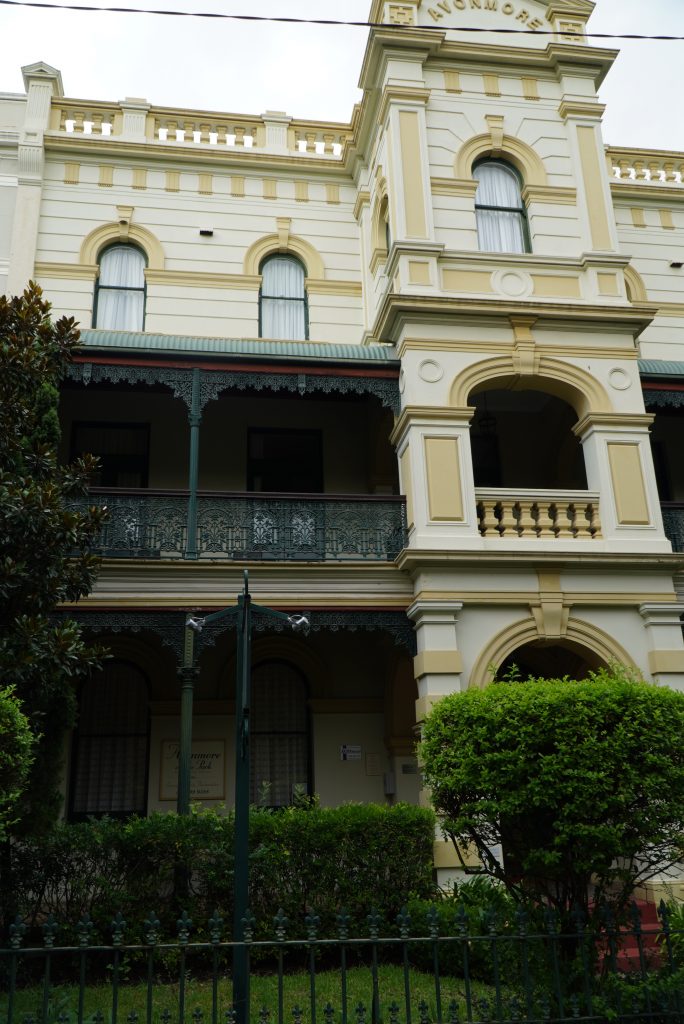 The suburb of Paddington was built during the Victorian era and contains examples of many and varied buildings of that period. The local Woollahra Council has a conservation order on all the suburb and a heritage order on many grander buildings. This will affect anyone owning a building in that suburb as all works must take into consideration the impact and compliance with the Council requirements. 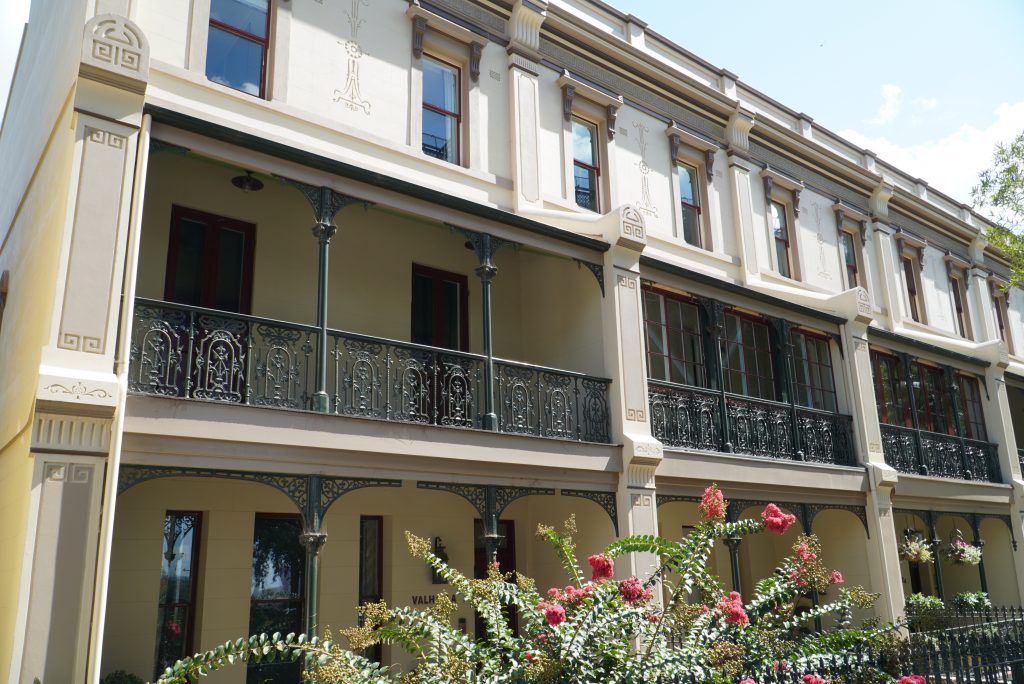 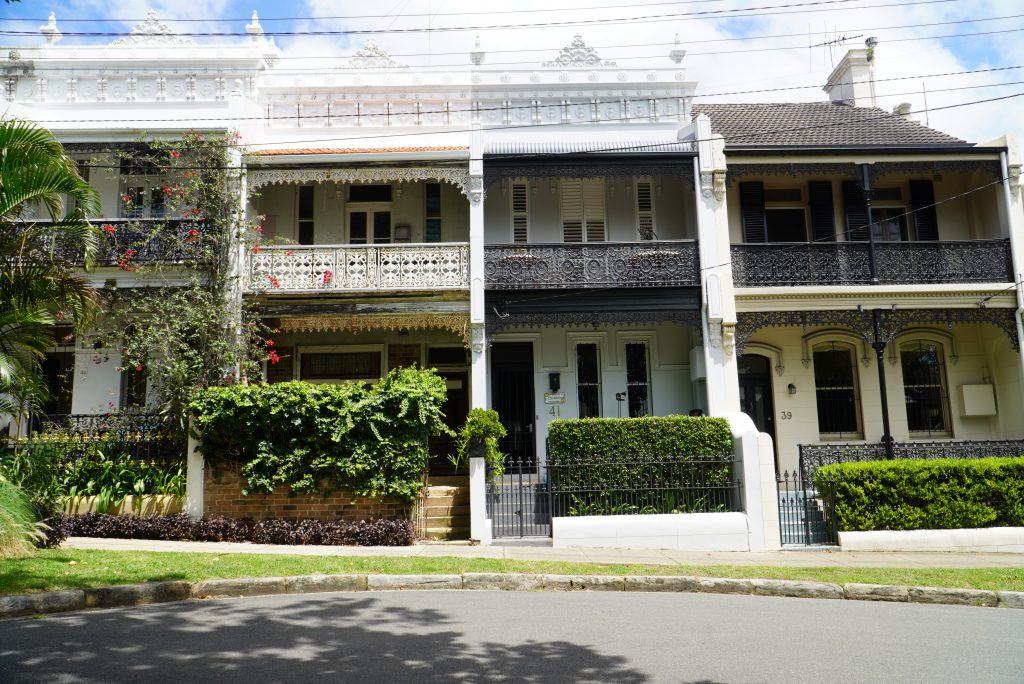 One issue with the larger residences is the labour required to maintain the buildings. This usually required additional staff, maids or workers. Some houses had staff living areas in the upper levels where the stairs to that level were steeper and the ceiling lower to remind the staff that they were not entitled to the same privileges.

Some “lesser” Victorian houses had a side door towards the rear where the staff would enter. The staff were not allowed to enter at the front door, and they were confined to the rear working areas except unless they were cleaning or serving. This side entry now seems an oddity in a floor plan but was relevant in that era. 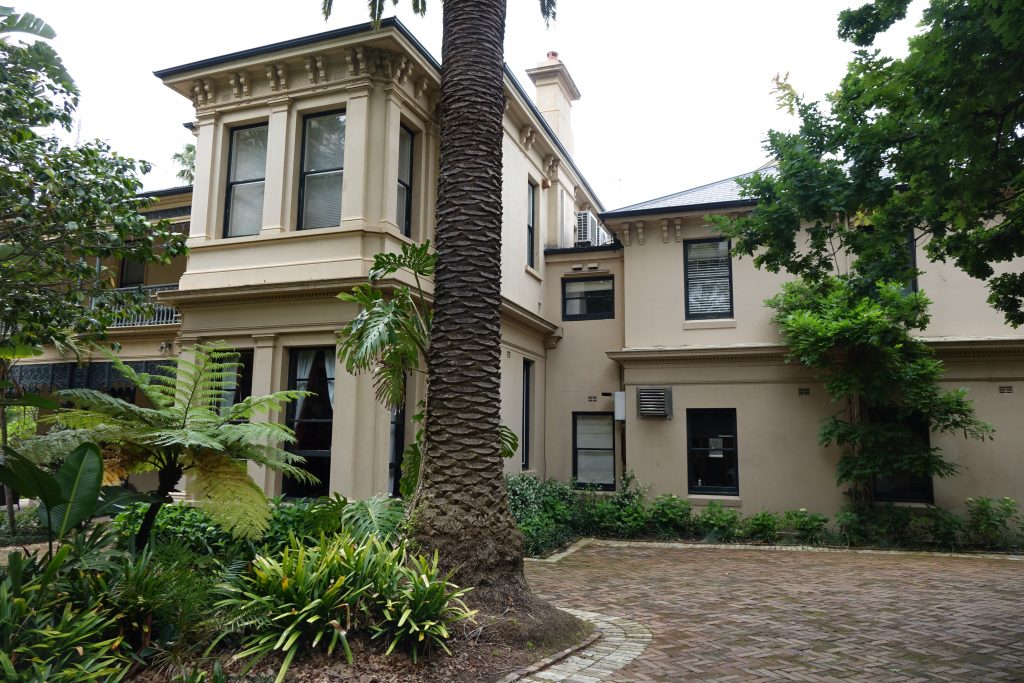 The front room was originally the “parlour” room or what we would call a lounge room. Guests would arrive for dinner and be taken to the front room. In grander houses there were two pairs of folding doors, which then opened onto the next room, which was the largest room in the house, the dining room.

The next room to the rear was the kitchen and the maids would bring the meals into the dining room. At the end of dinner, the host and guests would “retire” to the parlour while the maids cleaned up the dining room. In larger houses the men would move to the smoking room for cigars and port.

Typical of the roof construction was to have undersized timbers by today’s standard, but at the time there was no building code or Standard to adhere to. When renovating a Victorian era building one must understand the type of building materials and adequacy to carry different materials. Installing tiles on a roof for instance can be a mistake as the structural timbers were not designed for that load and will either sag or collapse. The roof structure was designed for corrugated iron or slates, as they were the only materials available at the time.

The Victorian era came to an end in 1900 for several reasons including;

As part of The Federation of Australia, a minimum wage was introduced. This meant that real wages and benefits had to be paid to servants, maids and tradesmen to maintain labour intensive house. This is the reason that many grand Victorian residences fell into disrepair and were out of fashion and favour for a long time.

Many became boarding houses or divided into units. Larger estates were sub-divided. Many houses lost their features, such as grained doors and joinery in the name of cost cutting in the form of a white paintbrush.

There was a desire for an easier to maintain house on a separate block of land and a garden. This included breaking free of the traditions of the Victorian attitudes and a more relaxed lifestyle. This led to the introduction of the Federation freestanding house which contained smaller and more ornate furniture in smaller rooms.

New outer suburbs were opened such as Summer Hill where one could catch the “iron horse” (steam train) to work. Also, suburbs as the garden suburb of Haberfield became attractive where detached houses with gardens appeared.

Many houses were built with a view of the trains or main road where they could show off prosperity. Unfortunately, today there are many more trains and cars and these houses are not as popular.

Around 1900 the style of houses was starting to change. This can be identified using different materials or styles and is referred to as a transition or cross over period or style.

This photo shows a typical Victorian terrace, but with red bricks and tuckpointing. 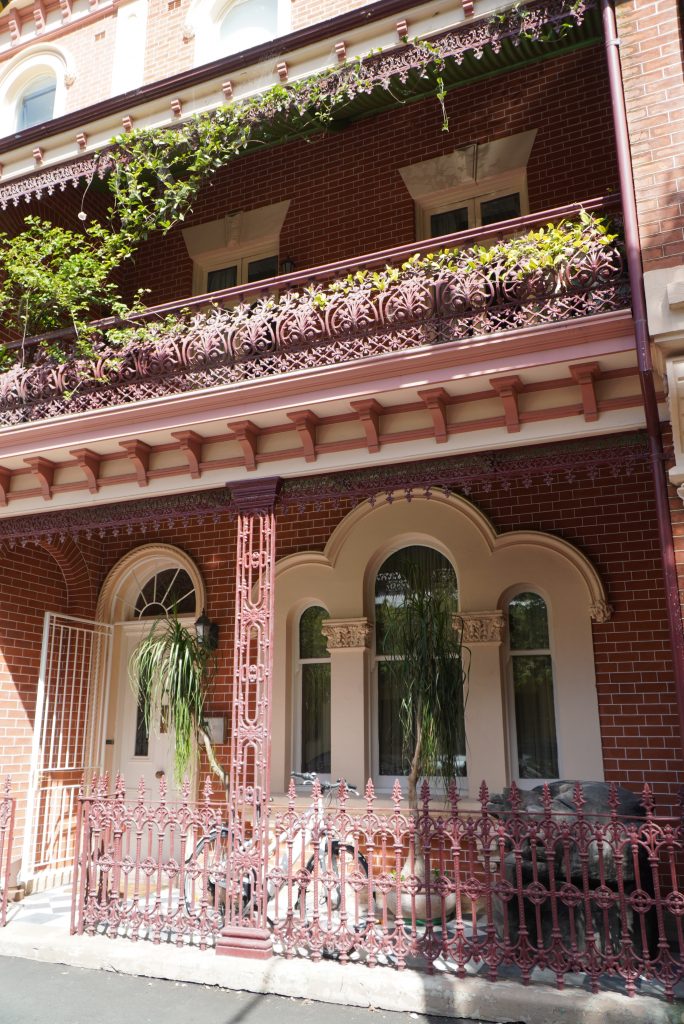 This house is a typical Victorian floor plan and originally metal posts and now missing cast iron ace panels but has red bricks and patio tiles from 1900. 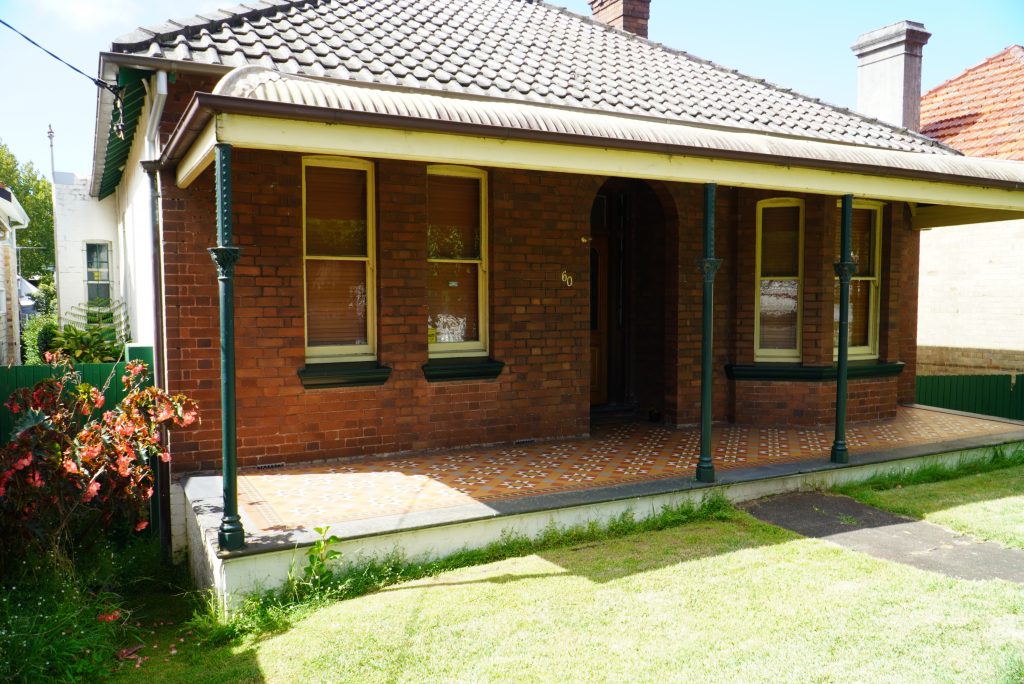 For professional identification of a building and advice on the construction and best way to repair, renovate or extend and existing older or heritage building then contact our office on 9418 7750 or email d.hall@buildreport.com.au.

Get A Quote
Learn More